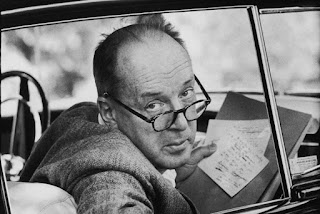 A snapshot below from the Algonkian Writer Conference Competitive Fiction Guide on the subject of learning the craft of narrative enhancement from a variety of successful authors. This example features Nabokov.Nabokov’s narrative in Lolita pushes forward largely due to his gift for discerning meaning and detail in everyday life (which is necessary since Humbert H. is a hard character to cheer on) and reporting it with the flair of a phenomenal writer. Basically, however, you can break Nabokov’s categories into observations, ruminations, and fantasy.  Here we see examples as Humbert wanders a department story looking to buy underwear for Lolita:

Narrator observes the behavior and quirks of others: "The painted girl in black who attended to all these poignant needs of mine turned parental scholarship and precise description into commercial euphemisms, such as petite. Another, much older woman in a white dress, with a pancake make-up, seemed to be oddly impressed by my knowledge of junior fashions; perhaps I had a midget for a mistress …"

Fantasy:  "I sensed strange thoughts form in the minds of the languid ladies that escorted me from counter to counter, from rockledge to seaweed, and the belts and the bracelets I chose seemed to fall from siren hands into transparent water."

Ruminations on the ability of objects and organizations to affect human life: "There is a touch of the mythological and the enchanted in those large stores where according to ads a career girl can get a complete desk-to-date wardrobe, and where little sister can dream of the day when her wool jersey will make the boys in the back row of the classroom drool."

Surreal metaphor:  "Lifesize plastic figures of snubbed-nosed children with dun-colored, greenish, brown-dotted, faunish faces floated around me. I realized I was the only shopper in that rather eerie place where I moved about fish-like, in a glaucous aquarium."

The type and quality of narrative here is obviously dependent to a large extent on the personality of the narrator continuously engaged in filtering and interpreting the environs. The narrator chooses to focus on things which interest him, comments on behavior he finds odd or objectionable, reveals his fantasies, etc. So what do you as a writer learn from this?  By placing a specific character with well defined traits at an event, or in the presence of something which must be described or experienced, you render that event or object in such a way as to reflect the character’s mindset, biases, emotion, beliefs, and perceptions.

Also, when considering the creation of complex narrative filtered through the mind of a suitable character, you would be well advised to use the Nabokov approach we see above.  In other words, before you begin to write the scene, first sketch the scene and it's parts, then brainstorm each nuance and part by creating a fantasy, an observation, an associative flow of thought, etc.  Keep a journal of these author ruminations and parcel them into the scene as necessary at such time you write the first draft.  Later, this manner of brainstorming a narrator's mind will come naturally to you.

Therefore, choice of character viewpoint when rendering an entire work, or a scene, or a chapter can be critical.  Consider carefully!

It could make the difference between a mediocre novel and a great novel.